Q So who is Claire Partington?

I’m an Artist working in Ceramics

Q Where in the world are you from?

I live and work in North West London, UK. My roots are further north, but I’ve been a Londoner for nearly twenty years. I like the ever changing diversity of London and I have my family here. 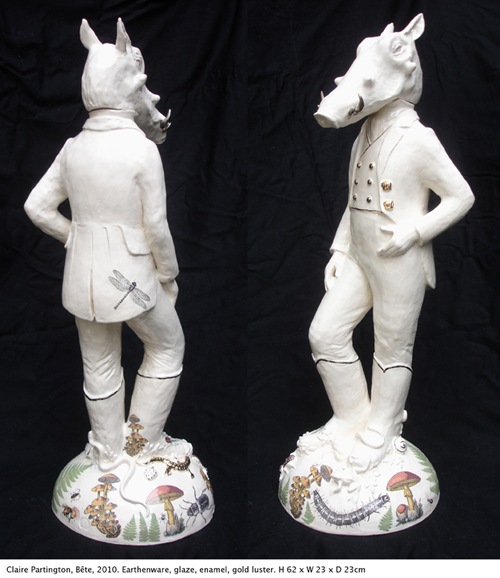 Q When did you decide to become an artist/ maker?

I was always making stuff as a child and I left school to study Art, it was pretty much an automatic impulse. I moved to London to do a Fine Art degree at Central Saint Martins, specialising in Sculpture, but I found my year group very serious and disjointed and I couldn’t really gel. I took a year out, and went back into a much more relaxed group, but by then, I was more interested in the practicalities of life and I’d lost interest in making my own Art. Obviously, I was still very interested in Art and Design and, once I left full time Education, I eventually found jobs in Museums and Galleries working in Exhibitions both as a technician and exhibition organiser. 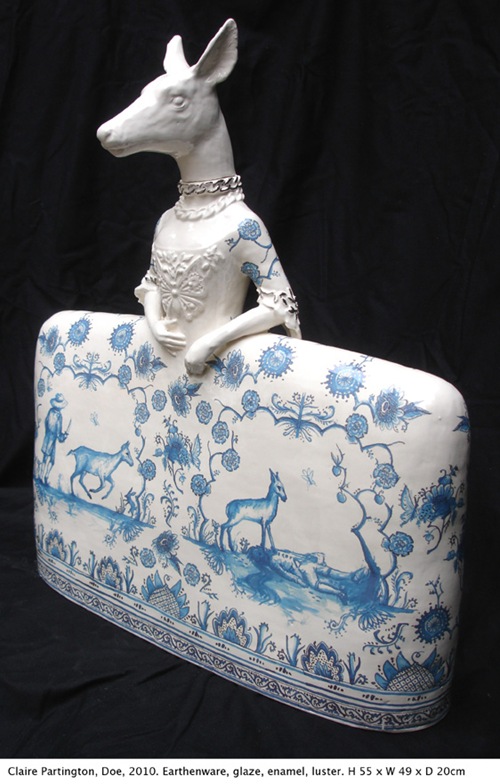 Q What made you choose the materials that you work with?

I always looked forward to Pottery lessons at School, most probably because we had an excellent if somewhat anarchic teacher who had some of his vinyl collection in the studio and let the students choose what music to listen to, so it was a bit of escapism from the norms of school life (I still have the Funkadelic record he gave me). It’s also a very rewarding medium – instant gratification, even though ceramics has a number of processes, the initial modelling stage can be very quick.

I returned to making Art and ceramics in particular, because I had a career change from Art and Exhibition work to Music. In 2003, I got a job at a Mute records archiving their back catalogue and I started attending a Ceramics Workshop in the evenings at Kensington and Chelsea College (which was just a short walk away) and I stayed there for about five years.

I think my return to making, especially in ceramics was prompted by the detachment from the Fine Art world, so not having the pressure of finding some conceptual reason for making Art and returning to auto pilot. Although my work is Fine Art and obviously has a lot of cultural and historical references, it’s primarily produced for my own enjoyment. 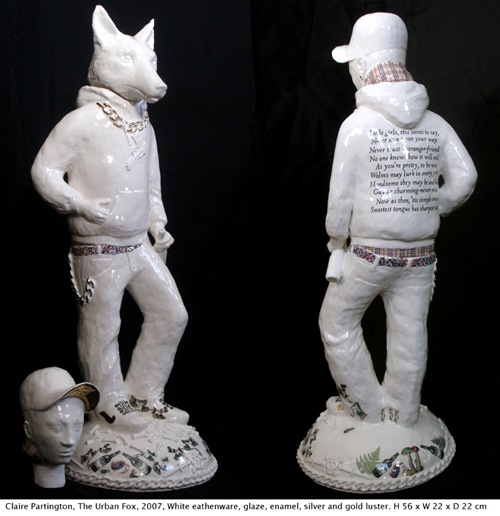 Q What other materials would you like to work in?

As a sculptor, I’ve tried all sorts of media. I do add a bit of mixed media to my ceramics here and there and I’m going to continue with that, but at present I’m sticking with clay.

Q Where do you get your inspiration from?

A lot of my work is based on folk and fairy tales, so they are illustrations and I’m inspired by some of the illustrations from books I remember as a child. I started making a few figures based on illustrations by Russian Artist Ivan Bilibin, who had such a beautiful style.

I’m a magpie for decorative styles and I was lucky enough to work at the V&A Museum, which is such an inspirational place and fantastic resource for makers. I also did a Post Graduate Degree in Museum Studies as I’m fascinated by the need for people to collect and classify “stuff” and display their collections. There have been so many “golden ages” of European collectors and I love the European appropriation and misinterpretation of the “Exotic” in period interiors and applied Art and Design. 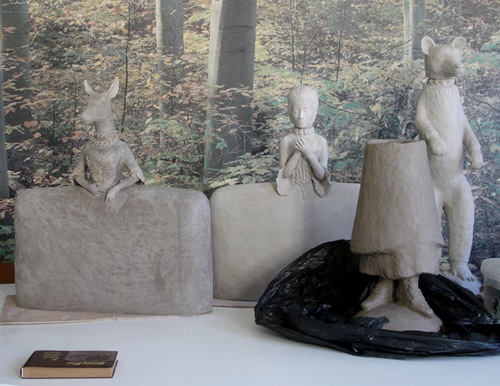 Q What motivates you?

This comes back to that automatic, spontaneous urge to make things. I always have ideas flying around and it’s a shame not to realise them.

I work from home and a studio. I have young children, so most of my work is done in my kitchen in the evenings and I have a studio space at Kingsgate Workshops in Kilburn that I get to at the weekends. 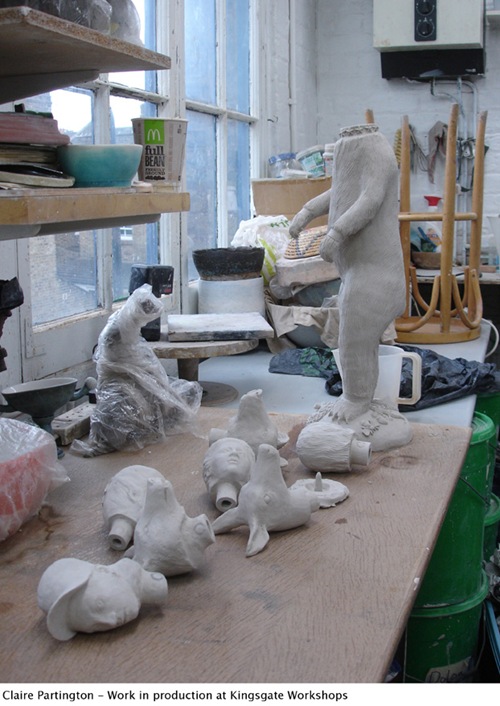 Q Crafts in the 21st Century – what does this mean to you?

Well, it’s a totally different beast from my perception of Craft from twenty years ago. I guess as someone outside of a Craft background I have a very stereotypical and withering view, a lot of brown – large wooden jewellery and brown ceramics, all obviously hand made and a bit wonky.

However, a lot of the work I see today is really design led rather than purely materials led and often very slick, maybe it’s a return to the high standards and diversity set by the Arts and Crafts movement of the late 1800’s early 1900’s or maybe there’s just more opportunity for Craft makers to show their work.

I have to say, I don’t consider myself to be a Craft practitioner, rather someone working in Applied Arts, as my background and work is Fine Art, but I think that reflects the change in how craft is considered generally. 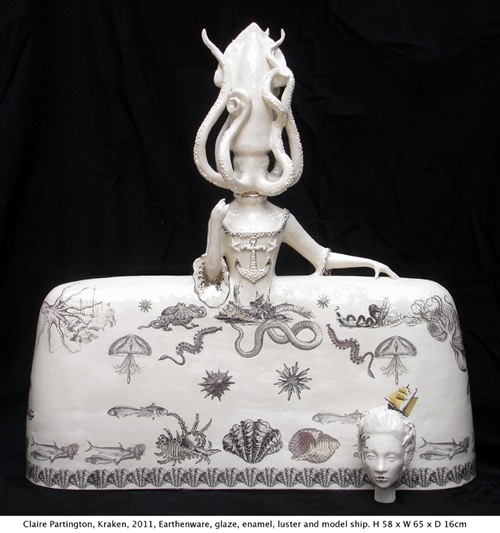 Initially, I made a conscious decision not to sell via Ceramics fairs and Craft galleries as I didn’t feel my work or myself would sit well in that environment. I’m represented by the James Freeman Gallery in London. I recently had a show there for the whole of June 2011 and they are very active selling at Art fairs like the AAF.

I’ve just been selected to be a member of the CAA, so will have work available from them and I have a website showcasing some of my work and I get a fair amount of interest via that. – www.clairepartington.co.uk

I also want do more curated shows, where the theme, rather than the media or price range is the reason for inclusion and I may show my work in a few group exhibitions in the coming months. See my website for any updates on exhibitions. 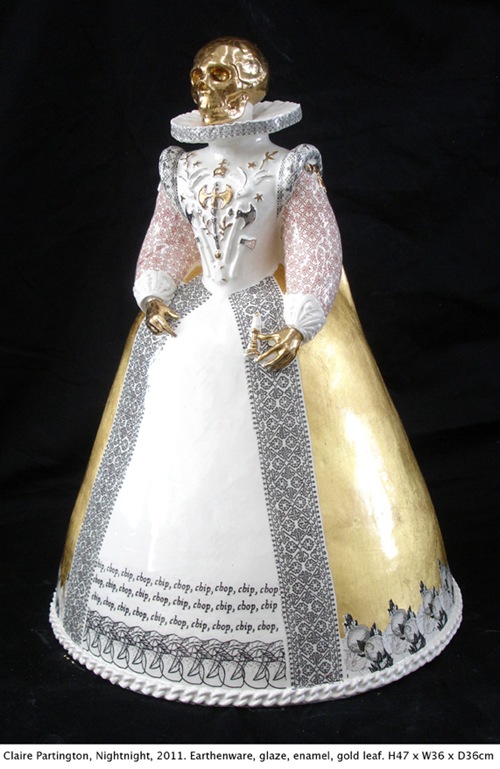 As I said before, I have young children, so I generally only work in the evenings, when I can get three or four hours of uninterrupted time. I can carry out research, like museum visits with my kids in tow, but I like to get out to the studio for a full day of work at the weekend.

It’s historically influenced and uses a lot of traditional techniques and materials, but there are a lot of contemporary urban references thrown in due to my environment and personal influences. I’ve been making a lot of large figurative vessels so I would say predominantly historically influenced figurative vessels. I’m currently making a large pair of porcelain figures of Louis XIV and his wife and I’m going overboard on decoration.

Q 3 words of advice for an aspiring Craft artist/maker... 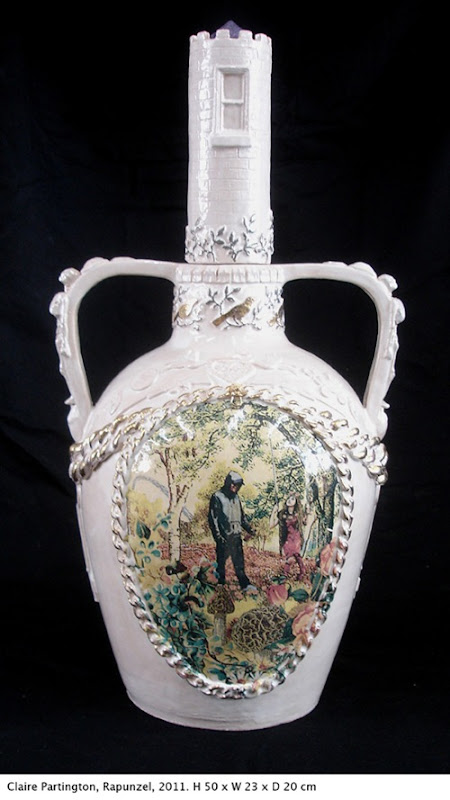 Q Who is/are your favourite artist(s)/maker(s)?

I’m really inspired by amazing skill, and there are hundreds of beautiful unattributed objects in the V&A in all mediums. I’m fairly new to the world of the Ceramic Artist and it’s only in the past few years that I’ve taken an active interest, but I really like the work of Matthew Groves and Sophie Woodrow. They are very different in their styles, but both heavily reference historical and literary themes. Their work is highly finished and excellently executed and, as with my work, their work has an appearance of age.

Q What music do you listen to?

It’s so diverse, it’s hard to say one thing. The only thing that curbs my listening choice at the moment is my six year old son – we can’t play anything too obscene, and he objects to random noise.

Music has always been a passion, from school, through college, I always had Saturday jobs at independent music stores. My first Full time job was at the British Library National Sound Archive and then, much later, I got to work at Mute, which been responsible for some awesome electronic noise. 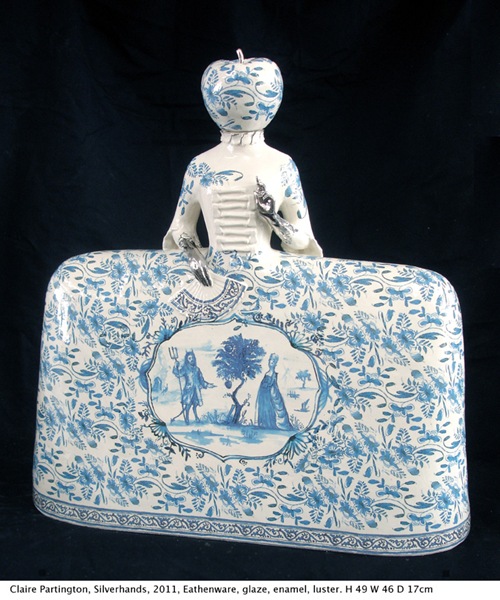 Go to the studio! 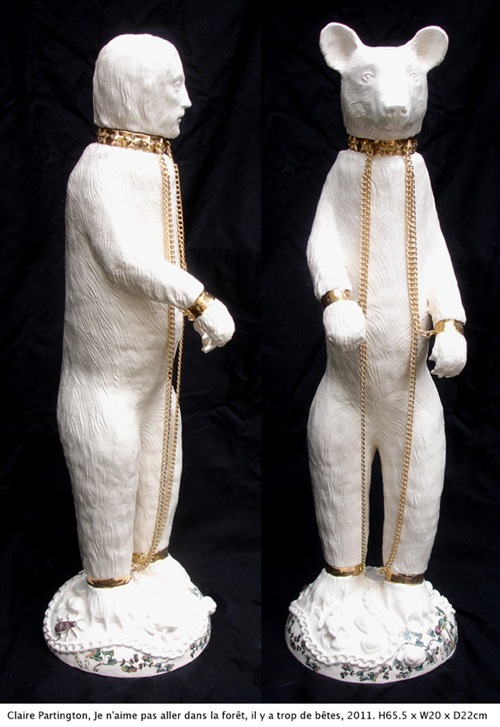