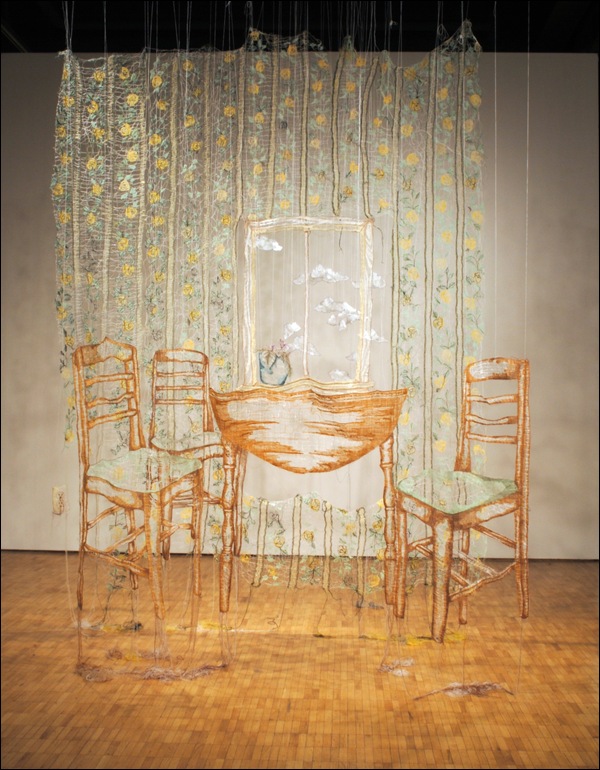 I am an artist working and living in Toronto, Canada.


Q You work in textiles but is there any other medium you work in or would like to work?

I like printmaking and working on paper with pencil and pens. I've recently been making thread work about lined paper and folds (see folded fortune image), so maybe this is bringing me a step closer to working with paper.

I studied drawing, printmaking and installation when I went to university. I was in a drawing class that was trying to expand our notions of what drawing was, so in this class drawing could be anything that used line. I thought that thread would be an interesting line to use in drawing and thought that it would be even more interesting if I could create a thread drawing that was just line. So I did some research and found a water soluble material that would allow me to sew into it and then dissolve the base.

Since what attracted me to thread was drawing, I think I will return work on paper, drawings and sketches. Printmaking is something I would like to do more of as well. 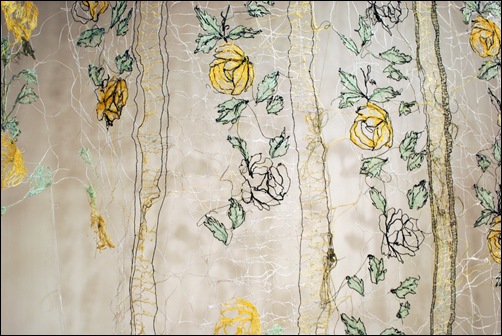 Stand in For Home – Detail of Wallpaper


Q How would you describe your work?
I would describe my work as being drawings that are made out of thread.

Right now I am creating my work from home studio. In the past little while I have worked in a couple different studio environments. I recently completed a three year residency at Harbourfront Centre's Textile studio in May 2010. Harbourfront's studio was a shared space where I worked along other craftspeople and artists.

Since then I have gone to do another residency in Dawson City, Yukon, where I worked in a historical home called McCaulay house. After returning to Toronto, I have been working from my home studio, which consists largely of a big wooden table, my sewing machine, lots of thread and many other small random items and materials. 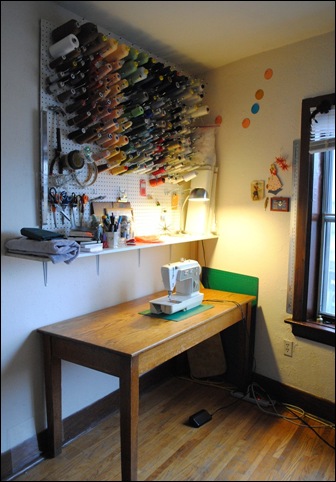 
Q What does your typical working day look like?

I guess there aren't too many typical days for me. There are other days that I spend writing, or visiting galleries, or installing work. As for days spent in the studio making work, things change a lot depending on the type of project that I'm working on. Sometimes I do a lot of drawing before I start sewing, while other times I will not have to do much prep work at all.

When I'm at home and working on pieces, I spend lots of time sewing on my sewing machine. My work requires a lot of sewn lines overlapping to hold the work together and recently I have been working doing bigger installations, so this translates into a lot of time with the sewing machine running. Some people say this sounds a bit like a helicopter, so I try to not work too late but as deadlines approach, my end time usually gets later and later! So, I wake up, drink coffee, answer emails, sew, take a break, sew some more! 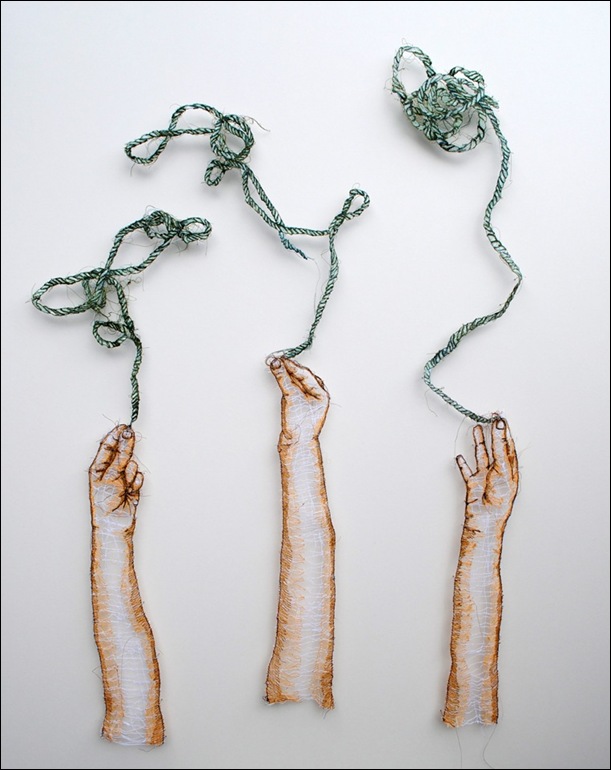 I am a bit of a night owl. But maybe I am not a morning person because I stay up too late! I like it when my work space is organized but there are times when things get out of hand. I like it when the dishes are done before i start working.

Its hard for me to work on more than one project in a day, I have recently discovered. I think it takes me a bit of time to get into working, so after I start one thing, I don't really want to move onto another project. Long stretches of working time are something I really like. Big chunks of the day to actually get into the work. I find it hard to work for just an hour. 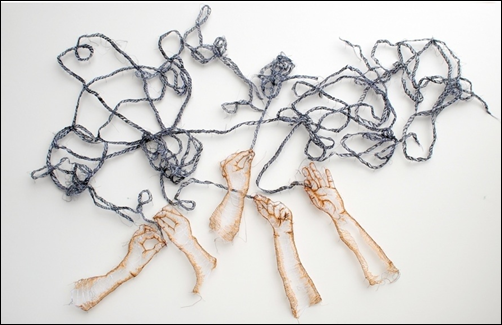 Some of my work is sold though a gallery here in Toronto, Lonsdale Gallery, http://www.lonsdalegallery.com/. I also have a website http://www.amandamccavour.com/.

Q What is your greatest achievement to date?
I think my greatest achievement was a piece that I made titled "Stand In For Home" which I made with the support of the Toronto Arts Council. I made this piece for a show at Harbourfront Centre's Main Gallery which was curated by Patrick Macaulay and Melanie Egan called "It's a Big Deal".

This installation was a thread rendering based on part of my kitchen in my previous home. I am interested in the vulnerability of thread in relation to the home, as both things feel temporary and fragile. Making this piece required me to re-visit, remember and re-create a space that I called home but is no longer mine.  This piece is a stand in, a synthetic, re-created version of home.

Creating this work combined two different bodies of work or projects that I had been working on; my life sized self portraits and small diorama pieces that I had made with Metal Smith Margaret Lim  (see forest image). The scale of the first series and the layering of the second really came together in this piece. 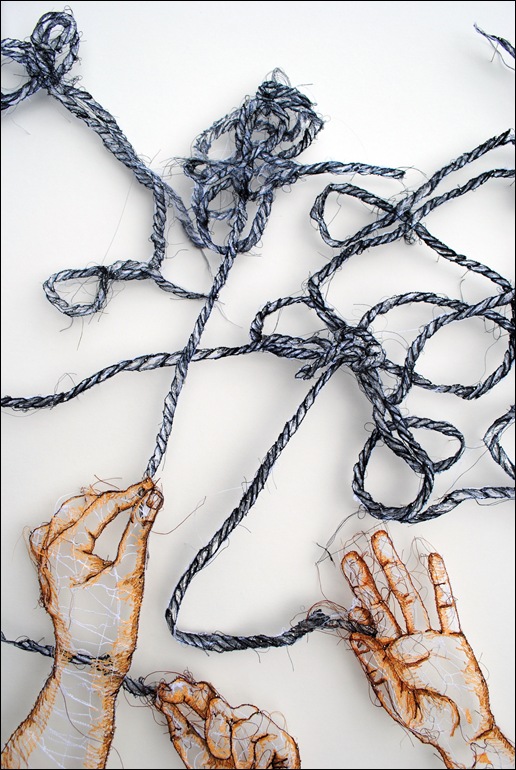 Compound Tangle – Detail
Q Crafts in the 21st Century – what does this mean to you?
I graduated from a fine art program at York University. I had always been interested in Craft and craft materials. It was at school that I began working with thread, but it wasn't until I was awarded a residency at the Harbourfront Centre's Textile Studio, after I graduated, that I was able to work with other artists and designers working in the same craft media as myself, along with other materials such as glass, metal and clay.

I think that my experience working in that craft studios at Harboufront changed my perception of what craft is. I think craft in the 21st century means a community of people and makers. A group of people making work and challenging materials and processes. 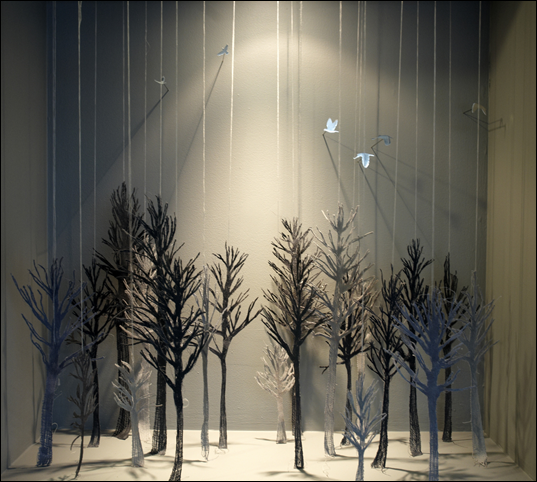 Forest – Collaboration with Margaret Lim
Q What music are you listening to at the moment?
I'm listening to the new Arcade  Fire album "The Suburbs". 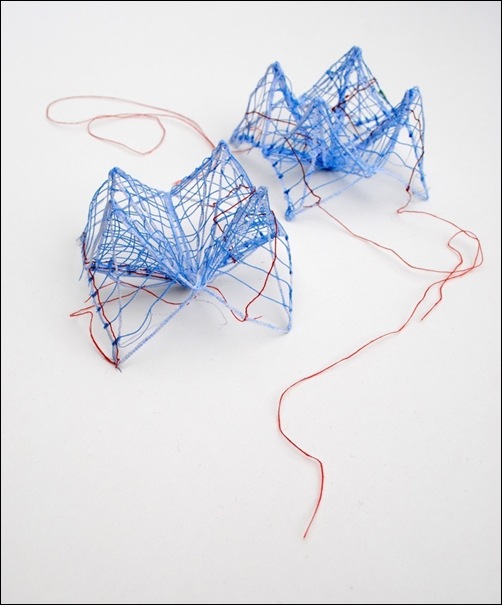 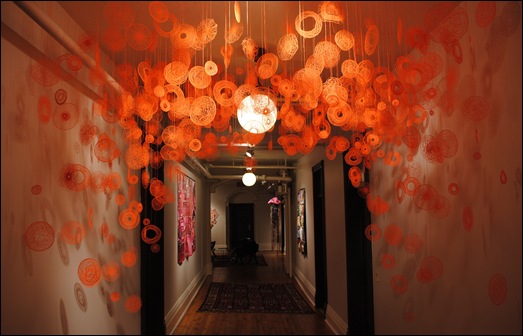 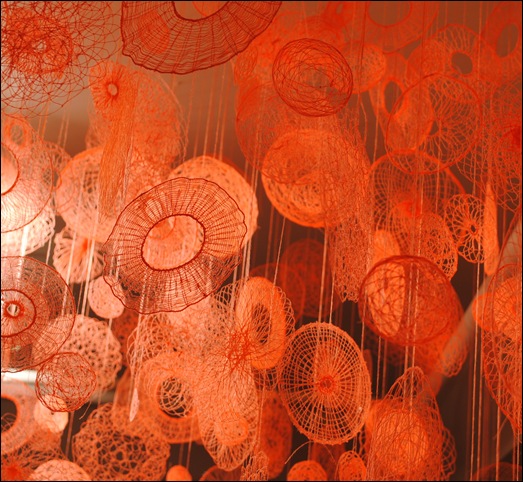 I like to go for runs or bike rides and I try to make time for these things each day. I like to go on walks around the Junction, where I live in Toronto to look at vintage and antique stores with a cup of coffee in hand. Eating food with friends is always nice and going swimming in lakes in the summertime has got to be in there too! 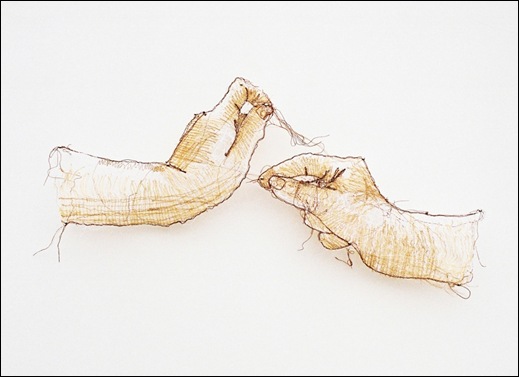 Lovely in every way x

Hi Hazel - makes me want to get the sewing machine out and draw!! I agree fantastic work and i love delicate nature of the thread line.

what an amazing and unusual body of work, truly inpirational! .The patience it must require!! Love that delicate effect that i am sure is stronger than one imagines.

Wow. That is a really cool technique for your thread designs.